I have been a bit slack on the trick training posts over the past few weeks, but Mawson and I have got some funny ones coming! And today is my first try at adding videos!!!

Fun, fun, that's not her exerting herself to exhaustion!

So, as per usual you need to get your reward system at the ready, clicker and treats, and a good mood!
We have worked on this trick for a long time, and for a long time Mawson was following the lure fine but could not get passed that stage. He was not connecting the whole movement and action. And one day, without any difference in the training, it suddenly clicked. Since then Mister pup has done beautiful dramatic shot dog, sometimes even adding a bit of drama to the whole scene with a staggering dying scene to my feet and the paws up in the air.

You want to train this in little bite steps. For some dogs it is very hard to roll or get on the side as they might not like to expose their belly. It's not the case for Mawson who has a bit of an exhibitionist streak in him!

Who wouldn't want to see my 6-pack? The ladies, they like it! And how will I get belly rubs if I don't show my belly, hey?

Also to note is that any dog usually has a preferred side, a bit like the hand you use for writing, some people can switch but let's be honest you are writing either with your left or right hand only! Well for dogs it's the same. Mawson will always dramatically fall on his left shoulder after a good ol' shootout with mum. You can train both sides but it can be tricky, well again try to write with your left hand if you're a righty... Can be done, but not always pretty at first hey?

Who said pretty? Yes I'm here, any treat? Gosh, she's still writing that thing, better run away or she'll ask me to do something! Now where is Mister pig?

So, to start training, it is easier to get your pup in a down/drop position in front of you. Then, gently lure him on his side with some treat on his nose. How to do that is relatively easy. When pup is down place the food in your hand in front of his nose without letting him get it, then make a circle with your hand going slowly closer to his chest down and backwards and at the original spot of his shoulder when he was down, making sure that the nose is glued onto your hand following the treat. Normally, pup should slowly roll on his side. Here is a dodgy demonstration video of the lure to get pup on his side (mostly because I used the wrong hand! But you get the idea I hope).

Repeat this a few times, releasing the treat when pup is on his side with a big reward/"yes"/click. You will need to work on this trick for a bit of time so you might want to get this action going over a few days just repeating the rolling slowly on the shoulder. You can then get the whole action going with the pup from a stand position. Exactly the same way to lure, except that now you extend the movement lured from a stand, all the way down and get pup to roll (always reward and treat). And remember for all these early steps, no verbal cues or hand signals. Just lure pup into position and then reward. When the movement is getting quite smooth, then start adding your verbal cue when the action is done, for example instead of just a "yes" and treat, say instead "bang"-"yes" and treat (my cue is the very shot resembling "bang". Well why not hey?). Hand signals will come way later!

Work on the action/verbal cue association for a while always keeping the treats going. Then start luring with just your same hand movement without a treat in front of his nose. Slowly phase out the treat luring and reinforce the verbal cue. However, always acknowledge the performed trick with a bit juicy reward at the end!

When that is going good you can introduce a hand signal, I use my hand folded as a revolver in a fist with two fingers (major and index) out, but that's because I've always wanted a six-shot... We even do the whole taking the revolver hand out of the belt case, pull the hammer back and then pull the trigger with a bang... Adds a bit of Hollywood drama to it all.

Don't worry I am looking for treatment for mum, she's a bit simple but she's harmless really...

And then, after a bit of practise and repeats, you can get to do the full western shootout "a la John Wayne"! Like this Oscar performance or this dramatic scene :).
Sometimes, you might need to make sure you have really got the pup as he may get up so make sure he is really dead as a dodo!
Have fun training the next big thing in Hollywood ;P

That's what I think of all this training and mum's explanations!! 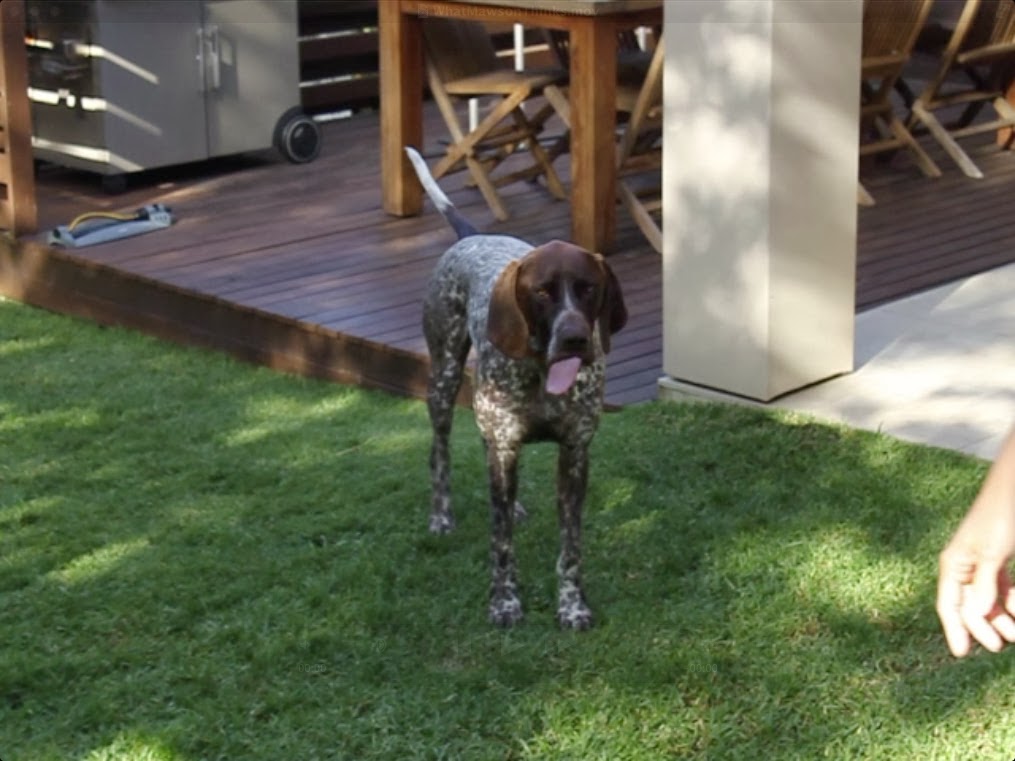