We have started trying to record our training runs for agility. For the moment we have been so badly organised that we have relied on other people to take the videos! But that actually showed some interesting things so far.
There is one thing that is hard in agility (if only one!), that is finding the best time to indicate/cue for the next obstacle. You do not want to cue too early because the pup will mess up the obstacle he has to do first. But if you indicate too late, you run the risk to either waste a lot of time or get the pup to go the other way or take a wrong obstacle.
So you need to know the point where your pup is going to the obstacle and committed to it, niftily called the commitment point, at which you can indicate for the following direction. It depends of stride/obstacle/placement and a whole lot of other things. Mawson, being the big horse that he is, has got very big strides. Which results in him barely even taking a step between two obstacle where the other dogs would take 4 or 6, if not more. And we got an interesting point of view of those crazy strides with a couple of stills that Martin isolated. You can see at the front the two jumps, one on the righ that he just took and one on the left that he is going for. Mawson basically landed and took off about 3 metres away from the jump. The worse is, he actually made it clear! That pup is really a monster!! And another thing we got to learn is that the jumps need to be at least 4 metres apart or the flying bullet will try to get the two jumps at once... 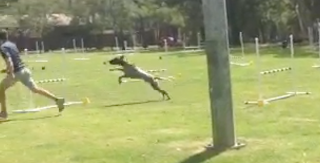 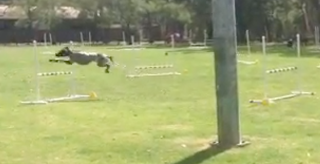 Now, let's try to work with that new knowledge at the agility training tomorrow!
Posted by Sophie at 19:35