All right so now for the "piece de resistance" of the weekend! On Sunday morning, something really weird happened: dad's alarm went off! Daaaad!!! It's Sunday!!! And the something weirder happened: mum got up... Don't want to say, but if mum gets up at 6.10am on a Sunday, something's definitely going on... And they started running around and packing stuff, guess what? There was a trial on, woohoo!

A full day of agility fun. It was the Springwood trial which had been postponed from the end of last year due to the awful fires that took place in the Blue Mountains around where the club is. This time it got also moved but due to flooding from the large amount of rain we've had over the past weeks! But everybody soldiered on and made it to the right place. Started early in the morning and the judging itself got on the way at 9am, so no lazy Sunday lie-in.

Minions had overdone themselves... They got us a mat for our gazebo, much more comfy than the muddy wet ground :) 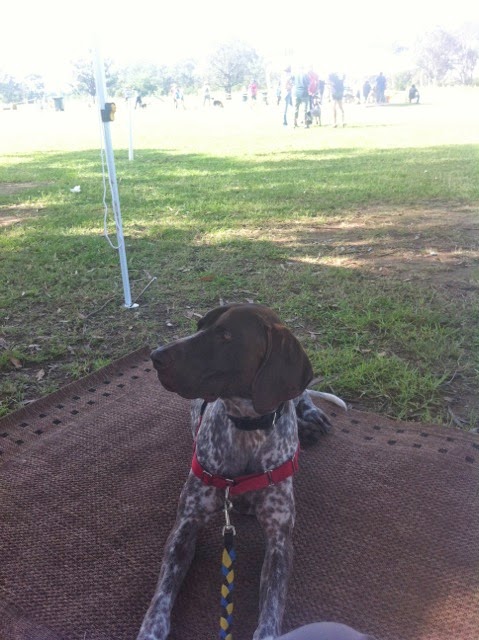 Our first event was the open jumping (JDO) judged by Pat Walsh. Even though did a bit of exercise
beforehand, the minions were a bit worried I would be too wound up to concentrate. I am so shocked by this insinuation! I did good! Great even, thank you very much... I only just missed the challenge which is a distance handling, but take note of that: it is a distance "handling"... see where I'm going there? I didn't say a distance dog move did I!?!? ;P Was good fun and even if we DQed cause I missed a jump (oopsy!) not sure if I got the weaves on the first go as well, might have been distracted and missed the entry before dad reminded me were I had to go... Ah well, we were still all very happy!

Then we went onto novice agility (AD). Ok I'm fast and love jumping, but agility is still a bit fidly for me. I don't do finesse... more bulldozer! I did a bit of a superman jump off the dog walk (just need a cape!!) so means that dad wasn't at the right place to get me in the weaves and I "might" have missed the entry... again... But I did some of the other contacts and did some of the tricky moves so again, even though we DQed it was my best agility run so far!!

After a short break, it was back onto some jumping with my first ever excellent jumping course (JDX). Dad and I got our novice jumping title at the last trial, so now we are running the class above which is a bit more complicated. Dad walked the course but missed a little issue that could happen with the sequence of jumps, so he wasn't prepared. Well let's say I didn't miss that issue and instead of doing an offset jump I went straight to the tunnel woohoo!! after that we continued on the real course though, had enough fun with my addition of a tunnel ;). I flew for the rest of the course. Even our judge said it was a very nice run, we were chuffed! And we did the whole thing with additions... in 32 seconds nearly 10 seconds faster that the team who won it! Maybe I should get that Superman cape, or more aptly Superdog cape!!
After another break, slightly longer this time, we got onto our last event of the day, the open agility (ADO). So I'm not the best agility dog yet, and ADO got a tricky distance part into it, but this time we did it perfect! The only problem is that dad was a tad slow to get to the next obstacle so I had to improvise... Well I didn't guess right but we did a whole lot of the rest good. I even did my contacts, unheard of to this day :P So once again DQ but not a bad attempt.

In summary for that trial day, we ended up getting disqualified on all the courses, but it was a very successful day. Dad and I did a lot of hard stuff really well. Even if I continue to be a little tornado on the course, my path of destruction is getting more accurate, there was just a couple of odd bar down I didn't relate in my breakdowns of the courses. The minions and I are also handling the whole day a lot better to keep my stress levels down, hence, another thumbs up (well for the minions... paws up for me).

Everybody was packing up, by then but there was still some of the NSDTC club members around. Judy had kept her new comfy chair out, and while she went to look for something, I snuck on there for a little try! It was so comfy, I'm asking the minions for one! 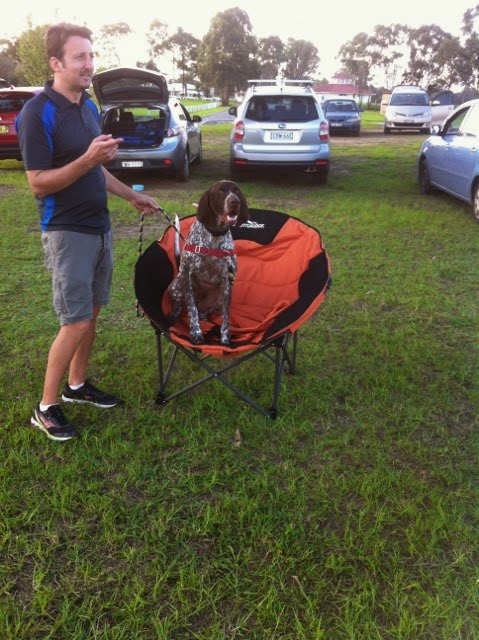 At the end of the runs the three of us went at the back to have a bit of a play and do some long distance retrieve, some in the long grass. I loved it, even though I was a bit tired, I had a blast. Couldn't even keep my tail still while I was looking for the bumper. Actually was a bit distracting cause it was making my backside got all wiggly... But that's what happens when you have fun! It's only a bit later that mum learnt there was a brown snake having a run on the other side of the grounds. She had been whining to dad who assured her there was no way to be snakes there... I guess if she had known she would have forbidden any amusement so in a way, I'm not complaining, I'm a death defying daredevil!

Well at the end, I tried to do the big brave growed up dog cause you see, I'm 2 now. So I can stay awake all day, I don't need baby naps. I'm a big boy... I did all that all today and we went back in the car to go home... so I'll just rest my eyes for a second now, I'll be right there.... zzzzzzzzz ZZZZZZ