Stop working and play with me!

Sorry folks, but mum has done another trick and that's not even one for the Trick and Treat Tuesday... At least I hope that it won't be repeated every tuesday! She has been working until late, came back home after 7pm and still continued working on a skypidou call!! And what about me, may I ask?? Just a few pats and that's it!! I am abandoned like an old rag!! Then the chicks played her by faking to be sickly to get some attention over me (How dare they?!?!). All in all haven't really seen mum much tonight.

Still succeeded to make her feel bad and steal a bit of her diner.

Dad did get pity on me and took me out for a run/play/training for quite a long time, but I'm not telling that to mum so she feels guilty, mwahaha!
I played a few tricks on dad tonight, he kept leaving the empty bag in which they carry the pieces of jumps... so... I stole it a few times and had a fair few zoomies around the field!! That was F.U.N.
Dad finally got the idea after I stole it for the third time, gnehehe... But though I had fun, I must say that we got really drenched because it was pouring down with rain, what was that all about? I had ordered fresh evening breeze for my walk, not torrential downpour.

Anyway after all that, well we haven't had time to sit down to prepare our trick with mum. I know she has a few in mind but now all I want to do is have a snooze, if only they could turn the lights off!! 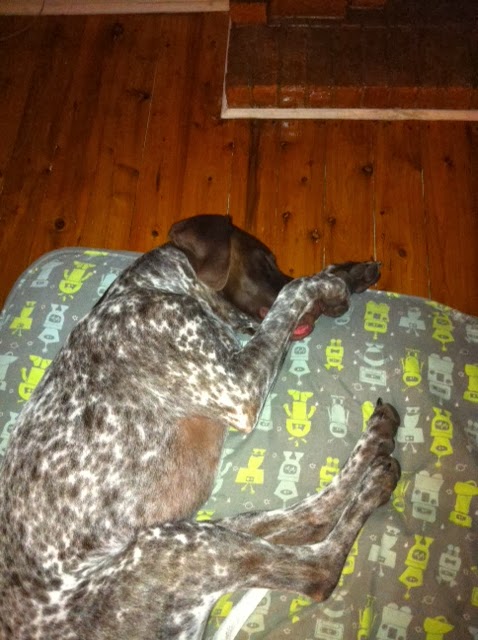