Woohoo! I did it! I am the king of agility!!! Ahem... well nearly... On friday, dad started throwing things in the car... a lot of things, so I got a bit suspicious. Usually that's when we go somewhere far that the car gets overloaded. Always thought that was mummy needing a loooot of things... but she wasn't there so maybe that's not all her fault? Mmmmm something to ponder... Then we drove off, I like long trips now, it's always a lot comfier.

I had to suffer a few hours of dad's "driving", then we arrived somewhere I had never been. There was some of those big horses running around and dad put the tent up. I knew all of the things he put in the car weren't all for me. Geez how much stuff does he need!! The evening was fun, we played ball and met plenty of minions and their owner.
The main problem was when we got to bed. Too many noises around and people moving, I had to warn daddy and protect the tent from the night monsters. I didn't sleep very well...

In the morning, plenty more people arrived and yayyyyy they started putting up some agility equipment! Woohooooo, I like agility!
Very quickly it was our turn on my fav event: novice jumping. We started and it wasn't right, I dropped a bar and stuff but that was because the minions around were all confused. We were the first one of the day and the timer didn't start!!!! How are they going to see my awesomeness if they don't time me? So we restarted, yippee!
And I flew round the course, dunno were dad was, I was doing everything, reading the numbers, turning all alone (:P) I met him back at the end of the course. He must have gone for a drink...

And it turned out at the end that I (ok dad..."we") won it! Fastest time of all the dogs aaaaand clear run, soooo.... I got my first qualification for a title, yehaaa.

Then dad tried to put me in the new crate he got me, so I "settle" and "relax"... It's all in cloth with zippers... so I passed my head through, mwahahah. I didn't break it, I swear, I just snuck my nose through the zip and pushed :). We were sharing the huge gazebo with my mate Jaxon and his mum Frankie. Jaxon also had the same crate than me, but I guess he must have washed it in a bit too hot water cause it shrank! it was real small. But he seemed to fit in I guess. He's a bit smaller than me, being a papillon and all. We had fun. And he is teaching me how to do a cute little face to get treats. He does that real well, but I guess being small and cute and with fluffy ears helps. My ears are not really fluffy :(. They are silky smooth though!

Then after a bit of wait it was time for another run, novice agility. Well that went a bit awry. I went a bit fast at the start and dad is too slow, gnehehe so I zoomed past him before he could get his fine positioning. Well sorry dad but I haven't got all day. Then again a bit later, he faffed about in the middle of the course and well there was a bit of a collision with dad, me and a jump... oopsy, well that was it for that cause I was a bit sore. Not as much as dad as he discovered later... He thinks he cracked a rib, oopsy bis....
Then we went back and I had to take a double take cause.. there was mum!!!! Mummy!!!!! Woohoo that's the besets ever run, even though mummy looked a bit stoned shall I say.
Dad said we were done for the day, but we looked a bit longer at the other guys running. There are so many good dogs out there! In the evening we went back to the tent. There was quite a bit of noise so I told it to mum, and she seemed to enjoy it cause she kept coming back and cuddling my head and then after a few time she came in the crate. She looked even more stoned in the morning.... But I went out of my crate for a cuddle. It was soooo cold in the morning.

We had a couple more runs on sunday. One where dad invented a course (well, dad you do that anyway....), and I saw my groupies so I went to say hello, but they seemed not to be happy and were waiving their arms and dad was rolling on the ground so I went back so see what all the fuss was about. We still finished with a place apparently though, I'm quite proud of my time and my awesomeness. Wasn't the idea getting as much ... oh! that was points not seconds? Ooops sorry...

Then mum went wild and entered us in Open jumping... Yeah good mum... and it was at the same time as the novice snooker run so dad had to remember two courses at once... He can't remember a full one alone how did she expect him to memorise two at once... But I did the hard stuff well, got caught out by the semi closed tunnel entry (not fair!) and didn't bothered finishing the last jumps... I was TIRED! Not too bad because it's usually quite hard and everybody enters even the master guys.

We continued looking at the other runs afterwards. The minions wanted to see what the gamblers were doing... I bet mum is going to add some more entries for dad and I to run in the next trials. Can see it's not her running! She just sits on her, ahem BIG BUM! On second thought maybe she SHOULD run...

We had to come back home afterwards because the minions said they wanted to sleep in their bed. Whatever, I liked cuddles with mum in the crate.
On the way back, though I was fully awake... I smelt some dodgy burnt smell around. Mum said that we were passing through the areas that had recently been burnt in the bushfire. It wasn't looking great :( 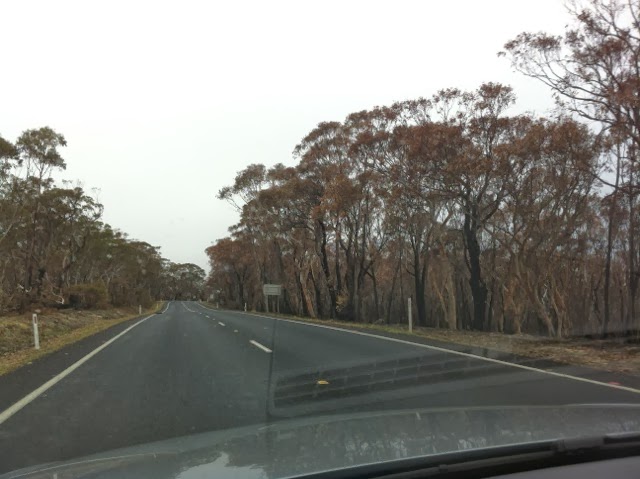 When we came back home, the minions told me that they found an 18th birthday party announcement  in the neighbourhood for the saturday we were out, so we wouldn't have slept here either!

They took my bed out and I went straight on it for a snooze. Just opened my eyes for two seconds to get dinner and go do my business, then lights out for me and my trophies... zzzzzz


On monday it was pouring down with rain, dad dragged me out in the morning. It was all wet!!!
But then I stayed and looked after mum. She was looking all green and kept coughing. I guess she brought something back from her trip. That will teach her to leave me alone with dad!
Posted by Sophie at 20:06