Well indeed what a night! All week the minions have been very busy. As they were always using their computers, obviously, my blog has suffered because I haven't had time to paw a lot of blogs. I thought that was another abandonment yesterday when we didn't go to agility training, but nooooo, we were going to evening trial! Yay :D

The only slight issue has been a constant and at time heavy rain that has made the whole ground very soggy and also has prepared a whole evening of fun. Got a few good stories ;)
First I think that the minions will rethink their idea of not making me do too much during the day before a trial... When we arrived at the ground, I was pumped up, yehaaaa, rainy day cool, with mud, oh the feeling of mud between my toes... Mum took me out for a run at the start and thought it would be a good idea, for a steady start, to attach me to the 10m lead... I thought the mud was great and did a few round zoomies, crazy GSP style... and then decided that bugger the round zoomies, might as well make use of the length of the lead, so took off... Mum had a bit of a realisation moment when she saw the loose lead disappear very quickly with only little her at the end and frenzied bullet me at the other. Mwahaha, didn't know mummy could fly!?! She was quite smug that she succeeded to stay on her feet, damn don't know how she did it...

We even saw a little mini GSP pup, she was so tiny, mum reckons I was never that small... yes mum I was, for a very short time and very much earlier than her, but I was!!!
Anyway soon after dad and I had to do our first run of the night. I guess mum didn't let me run enough because I couldn't help myself, that heavenly feeling of mud between my tootsies was too much... I had a few off course when I let it overcome me. Dad was giggling because apparently I was grunting in excitement... well I did nearly 50% of the jump and more to the point started and stopped the timer, so hey what is he complaining about...

On my second run, I was a bit more prepared and it was the least muddy course, so all paws and fingers crossed that we could do a good job. Unfortunately just a few minutes before our turn, the sky opened up and we got drenched by a torrential rain accompanied by wind... I don't mind it too much, was ready to run, but all the minions ran together under cover... And they say I am the wimp...
The rain slowed down and we restarted. Was still raining but at least we could see the jumps which is a bonus I guess.
Finally ready for some serious work! As usual, while I was trying to do that serious work, daddy thought it would be preferable to be rolling on the ground... I tell you these minions... He still got back up and we finished the course with only a bar down and two run around an obstacle, which is basically only 3 faults, but we still got DQed! I think the judge didn't think we could save the run and didn't realise that we actually did it... Ah well, We keep looking at the video but can't see the DQ...
Then we had a bit of a wait for the last course, it got delayed for a tad because as the ground was more of a mud bath that running track, the previous course had to be changed and rerun twice as it was not safe! After all that, it was finally our turn again. Luckily this time dad succeeded to somehow stay on his feet and follow me around that last course.

Yay a clear run!! That means that I got three qualification run (ok ok... daddy and I... didn't see him do a lot of jumping hey, lot of rolling yes, but ...) and to add a little cherry on top we got first place on the 600 course!

So as now I am a titled dog, I pray you to call me Sir Mawson.. Oh yeah mum said that that one was already take... I am outraged that these people think they can impersonated me! How rude... My twitter pals had the idea of Lord or Duke. I quite like Lord... Lord Mawson... yup that will do. From now on address me as Lord Mawson!
What again mum? Wot I only get Moruada Mawson Gigolo JD?? I think that with Lord in front it rounds up my name very well... tsss 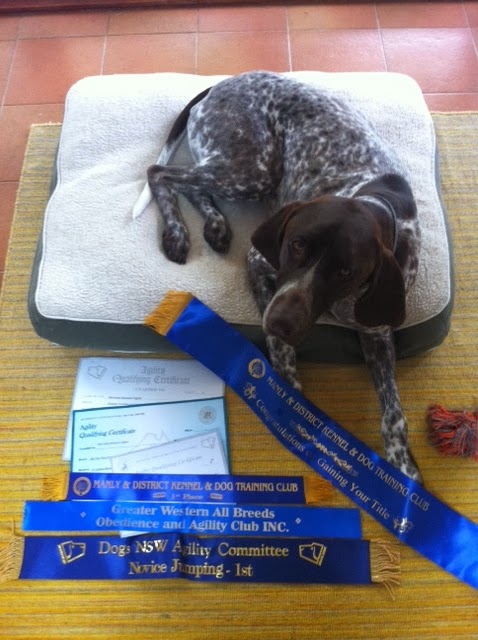 It wasn't only me having a super cool night! My mate Bodhi also got  his title tonight!! He was super excited like me for the two first courses but wrapped up the evening in style.
The lovely GSP lass Shelbe also had a smashing start of her excellent level jumping, she got a bunch of firsts and qualis on her very first night at this level.
I'm sure there was a lot of other great runs in the evening but the minions took me for a lot of walks and runs around so I missed a lot of the gossips.

So congrats all round :)

Saw my mate Jaxon too at the start of the trial, but he just had his haircut done and didn't want to ruin his look so he wasn't too keen on running in the rain and mud. His mum is going away for a while as well so that will be a long time until we see them again. Come back soon buddy!!