Hi pals, mum and I thought of talking about this trick from a chat I had on twitter with a buddy of mine. This trick is all about patience and steadiness, mmm doesn't start to sound easy does it?!... Well it's not that easy I guess. The trick is balancing things on my head/nose. It can be food (my preferred version) or objects (mum's preferred version cause she makes me look silly....).

Mawson what are you doing? I'm sick, we'll do some tricks later...

Don't worry mum, just open the treat box and I'll take it from there...
So where was I? Yes balancing things.
This trick needs some basic obedience/behaviour training from us pups:
- wait (preferably a good sit-wait, but as long as us pup aren't running around that's good enough)
- leave (that's a hard one, not to rush towards any food for immediate ingestion ;P I'll get onto that later)

... and basic obedience training from the minions:
- patience (cause I haven't got any for this nonsense so mum needs it for the two of us!)
- sense of humour (a treats that falls off nose is the same as a treat in my belly, just need to be quick enough)
- dish up the treats!! (well I'm not going to do all that nonsense for free, am I!!)

What is happening on here, Mawson? Oh you're writing a trick training post! Shall I take it on from here? ok...

As usual for any training, work with pup in short stints. Depending of the stamina of your pup, it can vary slightly but in general, it is better to do some short 5 minutes work and repeat this a few times per day for as long as it takes. It can be quite frustrating for the pup (and yourself!!) in the early stages and you do not want anybody to get grumpy! Nobody will learn anything!
Get your best happy yes/good boy reward word, or clicker if you use it and lots of treats (small tiny yummy things that won't need to be chewed for hours, like bits of cut sausages or cheese etc).

Sit your pup in front of you and tell him/her to wait. It is easier if the pup know food refusal or leave it command, which is where pup keeps his nose off whatever is in front off him either food/toys/clothes/car keys/ passport... ;P but it is not absolutely necessary as with the following method, you basically progress to the same target (it is just faster that's all ;P).

What I started up with Mawson, was to take what I wanted to place on his head in one hand and a treat/clicker in the other. One important thing I have found out for this first stage is to differentiate the hand that places the object on the head, and the hand that gives the treat/reward. That way, you will build up less of a jerky behaviour and in a way distract from the treat/object on their head, while focussing on the treat in the other hand. As most of the time when I balance food on Mawson's nose, well that's the treat... So now that he is steady either I pick it up and give it or he gets it himself on my command. Building the steadiness and  patience to listen to another focus point than "oh my gosh got food on my nose" is crucial.

Uh mum just to point out: OH MY GOSH GOT FOOD ON MY NOSE!!!!

Mawson, go back to sleep...
The first stage of the training consists of gradually approaching the object close to pup asking for a wait and leave. When the pup stays steady at the start, then click and treat with a big happy yes/good pup. For these first steps just build up approaching things above pup's head. Initially just get both hands out and get the focus on the "treat/reward" hand, not the "object hand". When pup focusses on the treat hand, quickly click and reward. Build that up, getting closer and closer to the pup's head with the object hand and keeping the focus on the reward hand.

When the stage of approaching your object hand overhead is steady continue with progressively coming down onto the top of pup's head.
I have found that for small objects the best place is at that little place on top of the nose nearly between the eyes (at least for GSPs!) for big objects, well depends of the shape really!!

The next difficult part, once you have a steady pup while approaching the object, is to actually balance the said object on the head and not make it fall repeatedly at the start. Remember you want to keep the focus on the reward hand, so something falling off again and again is going to be quite distracting. Chose something light and small to start with, like a pop corn or a small piece of cracker, and go slowly and steady. When at the stage of actually placing an object on the pup's head, start by just adding the object with a light of pressure on the nose/head and reward straight away (remember click and treat with the reward hand and keep the object in the other hand). Now again slowly build up leaving the balancing object on longer and longer. Keep placing the object and rewarding with the other hands.

Repeat the various stages a few times while keeping the training sessions short. If at any stage, something goes awry and doesn't progress, go back a few steps and solidify the bases.
You can then move onto trickier objects. Soon you'll be able to balance anything your heart desires on your poor trusting pup to have a good laugh. Ok remember that you both need to have fun so be reasonable and safe... and keep rewarding your pup!

That's it folks, have fun with the balancing act :)

See, now you know how she tries to torture me. She keeps finding new things to place on my poor little head! Sometimes she makes me look cool, ohh so cool...and tough... 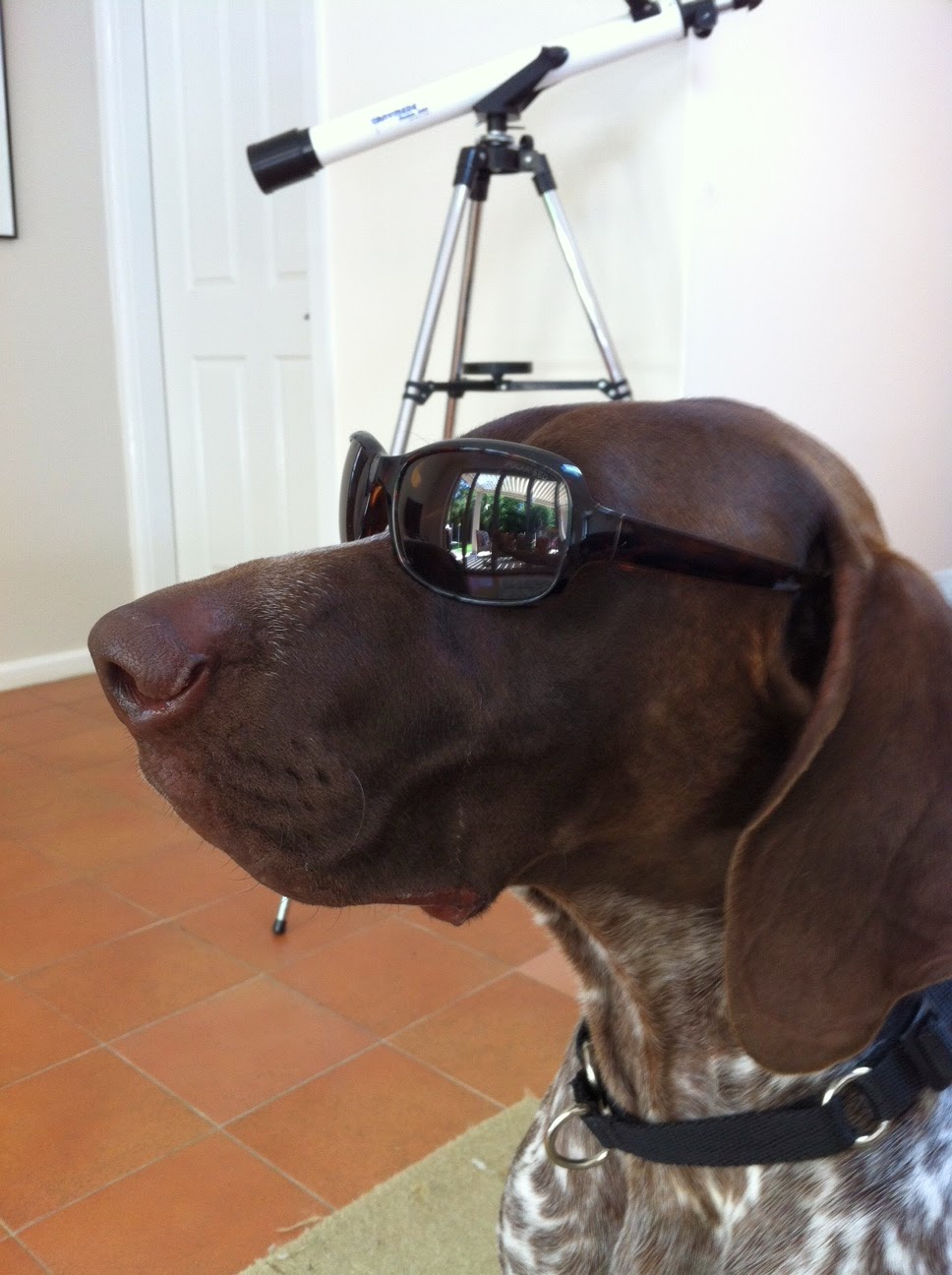 Ready for action, got my pointers cap on :) 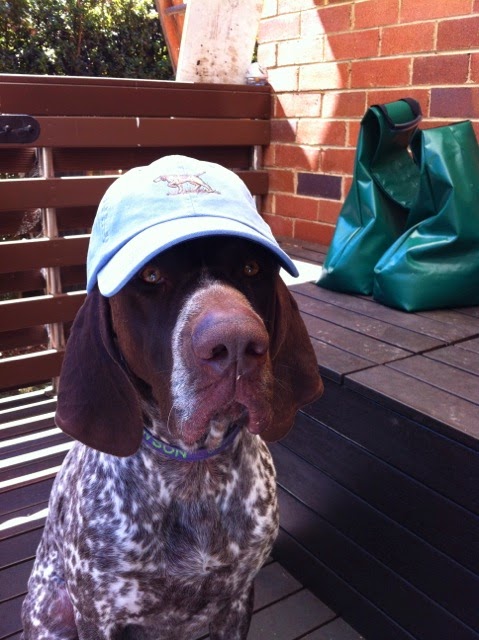 Other time it's a bit of good old torture (I swear she put that on my head, she just didn't take the picture) when is she going to give me that "go" release command! 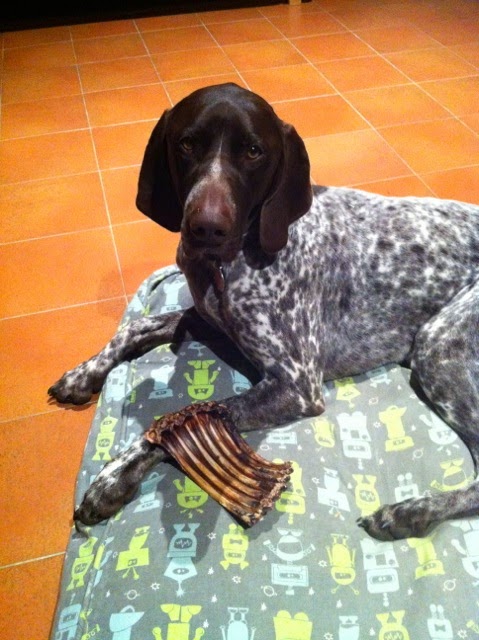 Yup she's just a meanie, ok hold on, I really smell pop corn, is everybody sure there is  none around? 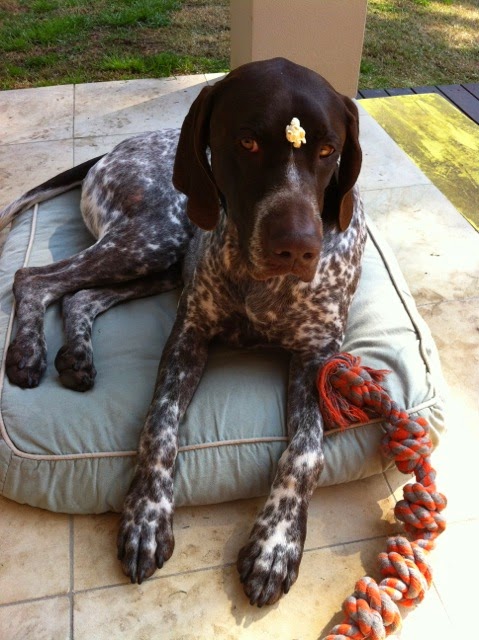 But really, what she prefers is making me look very silly. I'm lucky if I get away with just one silly object on me. At least she got that Heidi look with just one rope toy of mine... 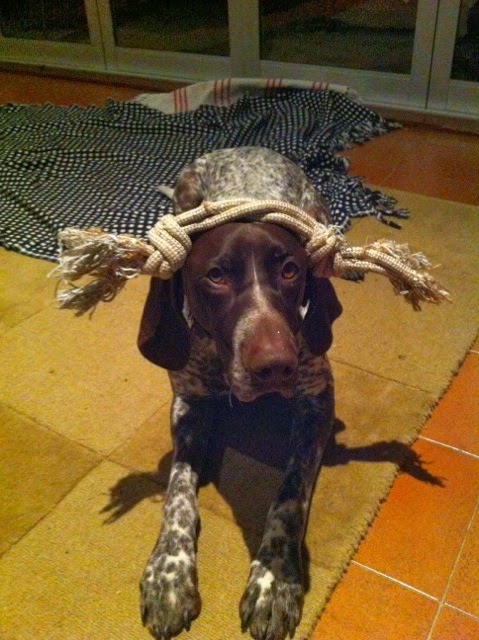 It has happened that she is going a bit overboard on her "training". Seriously... 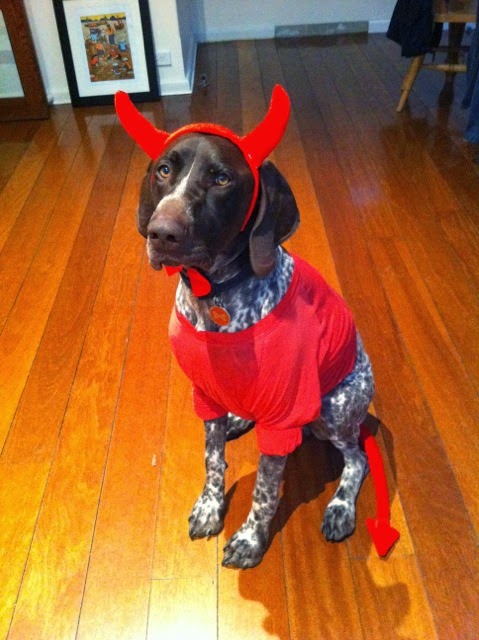