I'm so tired today! Yesterday was the first day of official training at our club, NSDTC, so we went along to the agility training in the morning. It was also the first agility trial of the year. We didn't overdo it in the morning training, but still did quite a bit, and it was also stinking hot!!
So obviously I demanded to go in the pool at lunch time, tsehehehe.

Anyway, the minions and I left mid afternoon to go to the trial, it was really hot still, around 34˚C, so not really running temperature! The minions had packed up the car with all the essentials, when I say "packed up"... they had thrown all they could grab in there, look at that mess!!!
Still, we made it and we went with the NSDTC crew, who are setting more and more impressive team tents. This time we had a full colourful ceiling with chandeliers and enough food to last a week. We pups would have gladly helped but for some reason we were shooed away... how rude!! 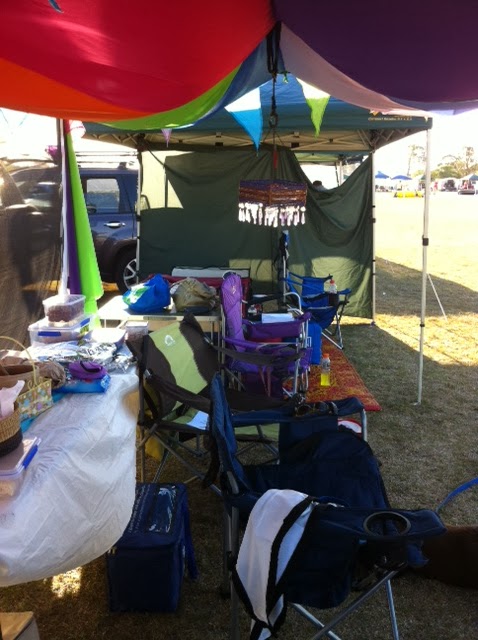 The first run of my evening was novice jumping. It was soooo hot. Dad told me to wait at the start but I was getting sunburnt so I decided to start to run. He wasn't very impressed and didn't make it to the 3rd obstacle before me so I'm afraid I sort of went the wrong way... well if he says that we're gonna run and he doesn't move fast enough, what do you want me to do, hey?! Anyway, we did the rest but I got a bit tangled and messed up in the chute in the middle. Well I'm a bit big and with my speed and the angle of it, splat! First run was a tad DQed.
Had a bit of time to wait for the next run, so I did a bit of begging... Didn't really work well even though I was putting on my best puppy eyes. *sigh*
Look at what they were eating! There was even some leftover, and that's only what mum had made. There was plenty of real yummy food.
Anyway, did my next course, was the RQH agility. Not that bad considering but my old nemesis the dog walk came back to haunt me, so I didn't do that... and I wasn't in a weaving mood either. To be honest very few pups were in a weaving mood so I didn't want to show off... Ok we DQed again!

Then after another bit of waiting, and still no food given to me by the stingy minions (oi, my dinner and treats don't count!), it was time for RQH jumping. I had a whale of a time! Went super fast...on the outside of the jumps, mwahaha. Well dad made me go a bit wide and I got it back for the broad and turned back again for the next jump, but couldn't be bothered for the tunnel, so weeeeeee. Just jumped the last one to stop my timer, thoughtful!

After that another looooong wait for our last run. Unfortunately I was nearly last in the last class from novice agility. I thought I would have to drag dad around the course, because he looked like he was falling asleep. I was on fiiiire, let's go go go... all right maybe I shouldn't have had all those energy drinks weeeeeeeeeeee...
So what happened in AD? Well there was another dog walk, so didn't like that one as well, and told you I wasn't in a weaving move, how many times do I need to repeat that, hey?? But I did the table great :D yay me! Well you guessed it, dad and I DQed again.

So overall not a lot of ribbons, but a bucket load of experience and things to work on *sigh* maybe tomorrow... And that's mostly getting dad to run faster right? I'll try to get mum to upload some videos of my blindingly amazing runs later ;P
I think my mates also had an interesting evening. Some great stays from Bodhi and a tad of nose work from Jaxon, but we all had FUN!
We came back super late, I'm sure I saw past 2am! That's not a proper bed time that, I need my beauty sleep hours. I couldn't get up this morning, went back to my bed after the minions tried to get me out. And I'm all sore, ouch my poor old bones.
Finally succeeded to drag myself back to bed tonight after the minions ran around all day disturbing me, all that chicken malarkey and mowing craziness is highly unruly and not to mention noisy! Humph, let's hope those chicks stop chirping tonight, but that's another story for tomorrow...
Posted by Sophie at 23:27