It's been another mahoosive weekend here, and from what I hear from the minions, I think they have been planning a few more for the coming weeks.

It started on friday afternoon. They came back from their "work" and started preparing things and throwing things in the car. I barely had time to wake up, before they also sent me in there. So that means another trial, yay, jumping and tunnels, here I come! The minions succeeded to take a dodgy road and we got stuck in traffic... I was soooo bored. Haven't had a run and I like the car now, but in moderation. Anyway, the car wasn't even advancing!


We finally arrived at a place I had never been before. It was all wet and windy, with plenty of smells, fuuun. But the trial looked all wrong. They had forgotten the jumps, they only put the little perimeter line. Maybe it was a fantom course? Spooky! And then mum started to try and make me do some obedience. What? But it's all wrong! Dad does my agility trials!! No way, I wanted to ruuuun. I could see that mum was getting a bit worried and looked increasingly desperate. Dunno what her problem was really. There was even my mates Bodhi and Jaxon, who do the agility too, so it had to be running and jumping woohoo. There was also plenty of other dogs and people I had never seen, and they didn't appear to be running or jumping. Mum tried to get me in the ring but I was really looking hard for the jumps and she forgot to remove my lead. Silly mum. You can see that she doesn't do the agility trials really, she doesn't know how it works! Then, after looking around for the jumps for a bit, mum took me to talk to the judge and she seemed to be asking where the jumps were, for sure. She really doesn't do the agility trials.... Oh... she doesn't, does she? ... oh, oops maybe that wasn't an agility trial? Oooopsy! Sorry mum, got confused. Maybe that's why she was trying to make me do the obedience moves, ooohhhhhh....

Ah well still got to get cuddles and hang around with my mates Bodhi and Jaxon. Bodhi was also doing the trial but he seemed to have caught on a bit faster than me that it wasn't agility... He did awesome! Just had a tiny problem at the end of the sit stay, but I'm sure I saw an ant trying to get his tail, that's why he got up.

Ah well, next time... Dad still took some pics of us three with our mums. I like the moves of Bodhi's and my head in the first 3 pics. looks like we choreographed it, tsehehe.

I'm sure Jaxon will get extra point when he starts his CCD trials, because he gets the L'Oreal look when he sits. He has got the puppy eyes working good, and he adds the ears and fluffiness! I can't do fluffiness, mmm need some tips from him on what I could do....


On saturday morning, we did a bit of agility training with Jaxon and miss Coco. The official training stopped last week, but we told our minions to bring some of our equipment and had a bit of fun. We also had a bit of a play exchanging minions for the runs.
I think that Jaxon's mum Frankie and Coco's mum Heather got a bit worried when I was running with them, cause I make a bit more of an impact on the ground than the others. Dad said the other two were little sports car and I was a truck! I'm not heavy, I just have big bones! Anyway, it was cool.

After that we stayed on a bit and there were people arriving and mum took out the dreaded costume. I did my best to rip it apart. Got one of the tail off fairly quick and destroyed the bow tie in a few seconds, but dad (the traitor!) fixed it... I did a good job wriggling though, so mum gave up and only left the fixed up bow tie on me. Phew! Coco was in pink fairy and Jaxon was a reindeer in training!
But oh boy, there was some Christmas spirit in the ideas for costumes (and I think the liquid spirits helped too)! There was also a lot of games and yummy food that the minions didn't want to share, rats!

I was pretty tired after the party, and trying to be good all day. I succeed to plea my way into the pool. Had a good swim and got to play and retrieve my favourite dummy, yay. All what was left to do for the rest of the day was to curl up on the bed and sleeeeeeeep. 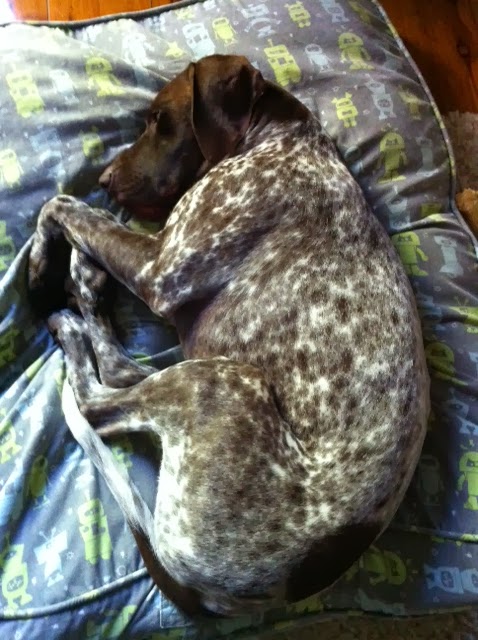 Today, I was a bit refreshed, but still a bit tired. Mum and I went for our usual sunday walk, but this time it was a bit shorter and through the streets instead of through the bush. We saw a few little dogs who didn't like me :( and then came back home for some more swimming and agility crazy runs. We were training hard for gamblers (where the course is a completely made up thing by us :P).
The weather had warmed up a bit so time for some more Zzzzzz in the afternoon.


And this evening, I had another surprise. Nana Shirley came to stay for the night, I had to do my best impression of savage beast when she arrived, but I like nana Shirley, and all that looking fierce is hard work. I milked the whole situation a bit with pathetic crying, to get more treats you see, and I even got a quarter shinbone!! Now I am exhausted AND full of food. Life is sooo hard when you are a pup.