So, yesterday evening was Mawson and I's second Rally-O trial. Given our mock trial's preparations and previous attempts, let's say that I wasn't expecting much, but hoping that the advantage of home ground would help us a tad as it was held at our usual training club. We were number 37 in the Novice ring, so a fair wait before our turn. We did a bit of everything to get into the spirit from waiting calmly with a settle, a bit of a walk, a bit of warm up training with some of the Rally-O moves out of the course.
The course had some tricky tight bits, but mostly some turns and fun things. Definitely a bit harder than our first trial however, nothing that Mawson cannot do when nobody looks at him (or even just a few metres outside of the ring...). As our number was high, I got to walk the course a second time half way, not that it was going to be very necessary, wasn't it Mawson? Ahem... 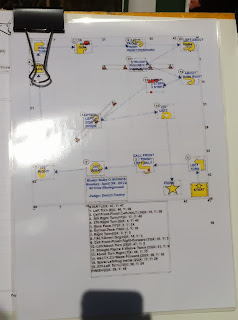 And then it was time for our turn. Tried the very upbeat and encouraging tone, happy happy coaxing... Weeellllll! Let's start by the positive and say that we did the first station fine!!... Look at the score sheet below, station number 1 didn't get us any deduction, yayy!! The other 2.5 that we attempted out of the total 15 were a little bit more problematic, however, we got awarded an E for effort from the line steward, even after I withdrew at the 4th station.... Just wish they would add some new moves in Novice Rally-O like "dog halts and scratches neck vigorously" or "dogs halts and thoroughly sniffs ground".

Martin did take a video, but I am not sure that the world of Rally-O, or the entire world for that matter, is ready for that yet! Mostly because Martin also took the run before me and that was from Karin Bridge and Gracie, and they got the nearly perfect score! One day... We'll get there, one day... Maybe in 5 years or that might still be a bit short... For now, I keep looking back at that video and crying of laughter!

In great contrast to our little "clown team" The others from the NSDTC crew did great with a lot of qualifications! Well done to Mel and Bodhi, Jacky and Fergus, and Karin did great with Gracie too, and a whole lot of other NSDTC members! Just not us! 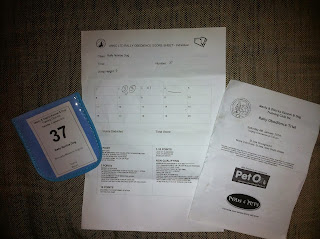 Now let's start again next week for the NSDTC Rally-O trial... Think that will be our last one before a bit of a break in that type of trials!
Posted by Sophie at 15:38