There wasn't many from the agility crew at training yesterday, they were all busy earning stacks of qualis at the Castle Hill agility trial! Well done to all of the 4 pawed and 2 footed competitors!!

So we were only 6 and that meant that Mawson had a pretty full on morning of jumps and tunnels.

We even continued some training during the midday break while waiting for the obedience class.

I've entered us for an obedience trial soon so we are polishing up our moves. Don't know if we'll stick along for the obedience trials very far though, as the judging is quite strict (bit over the top on some instances I think but let's see...) and it's hard for me not to say anything to Mawson and not praise him when he does something well. That's not allowed in those trials as it is considered as double commands (!). He can do it, but I'm sure it's me who will muck up by telling him a big YES GOOD DOG... We will see, I have been practising, with gaffer tape...

Anyway, he has done very well in the obedience class too. He was on the collar only, as the harnesses are not allowed on trial (again!).
Then they wanted to do a mock trial/run through at the end of the class as well. It was hot and none of the selected dogs did anything. Mawson was so tired after the whole day of training that he didn't even want to sit!! And another lady whose dog is so well trained, didn't even want to move when she performed her recall, the first time in the life of the dog that she didn't run to her mum. They gave up on trying to do our run through then, took them a bit longer than I thought...

Still I'm proud of my little monster, we had a few grump moments throughout the day, none due to him I shall add, just other people's "interesting" view of the world, but he has been exemplary. 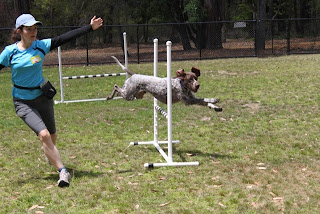